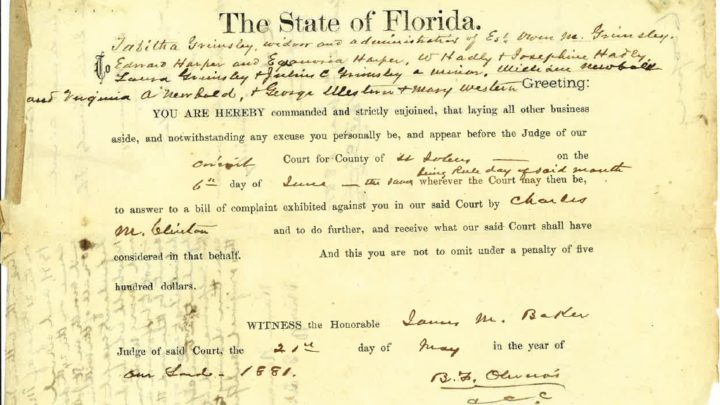 Just before COVID 19, a search of the St. Augustine Historical Society library brought up a name I had seen many times but for some reason, ignored. It was a civil court complaint file of Charles M. Clinton vs. Tabitha Grimsley from 1881 in St Johns County. We have no Tabitha Grimsley’s in the family and since I could not easily obtain the file, I simply put it on the back burner to get it later when the library reopened.

As I was working on my application for the Florida Pioneer’s certification program, I realized where I had seen the name Charles M. Clinton: in my land records where Owen M. Grimsley sold a small piece of property to Charles! I also realized at that moment that Tabitha has been a misspelling of Telitha. Thankfully the St. Augustine Historical Society is now open on a limited basis and upon request, scanned the documents for me and what a treasure trove they are!

Chancery Court is a holdover of English law from colonial times. The chancery court handled cases that could not be resolved in common law courts. Chancery courts are responsible for a variety of legal actions which include cases involving deception, contracts, dissolution of personal or business partnerships, mental disability and guardianship, juvenile issues, the redemption of land, and construction, as well as the enforcement of wills and trusts. The Chancellor of the Court is expected to not only use the law, but also the concepts of what is right and wrong, and what is most fair or just in all court rulings.

Charles M. Clinton sued the estate of O. M. Grimsley for the labor he completed between June 1877 and March 1878 for a variety of services, including work on a coffin.

Clinton states in the suit that Owen informed him that it was inconvenient to pay him in money and would sell and convey land by a simple warranty deed upon completion of work. Clinton worked for Owen until his death in 1880 and continued to work until the contracted jobs were complete. The land promised was a lot within the tract of land known as the Oliveros Donation. The Oliveros Donation is one of the original Spanish land grants and Owen purchased the entire grant from James and William Conners in 1873. The piece of land promised to Clinton was 15 acres (more or less).

In 1877, Owen claimed the work done was insufficient to pay for the land. Later in early 1878, Owen did create a warranty deed with his wife Telitha, who relinquished her dower rights, for $164 that was acknowledged before their son-in-law, Edward Harper, who was Justice of the Peace. Before Owen’s death in 1880, Clinton had built a home on this land cultivated the land to grow oranges, greatly increasing the value.

Owen never gave the warranty deed to Clinton and when Owen died intestate, the land remained with the estate. Clinton claimed Owen held on to the warranty deed and deprived and defrauded him of his right to the land, intentionally.

The entire family was subpoenaed to the chancery court 21st May of 1881. The back of the subpoena states that William Newbold is dead and they could not find Mary within the county.

By the 30th of May, Telitha and family have settled with Clinton. He will pay them $62, and they will deliver to Clinton the warranty deed for his land. Clinton’s land appears in St. Johns County Land Deeds, Book Z (1880-1882), with the date 26th Feb 1878 as the date the indenture was made.

This amazing document gives so much rich information about the family that I could not have found elsewhere. Before receiving this document, I knew Edward Harper was a Justice of the Peace for Putnam County but did not know he was also one in St Johns. It gives all of the names of Owen and Telitha’s children, along with their spouses. It gives the location each child was living during that time period. I will be using this proof of Eganora’s relationship to both Owen and Telitha as well as proof Owen and Telitha were husband and wife.